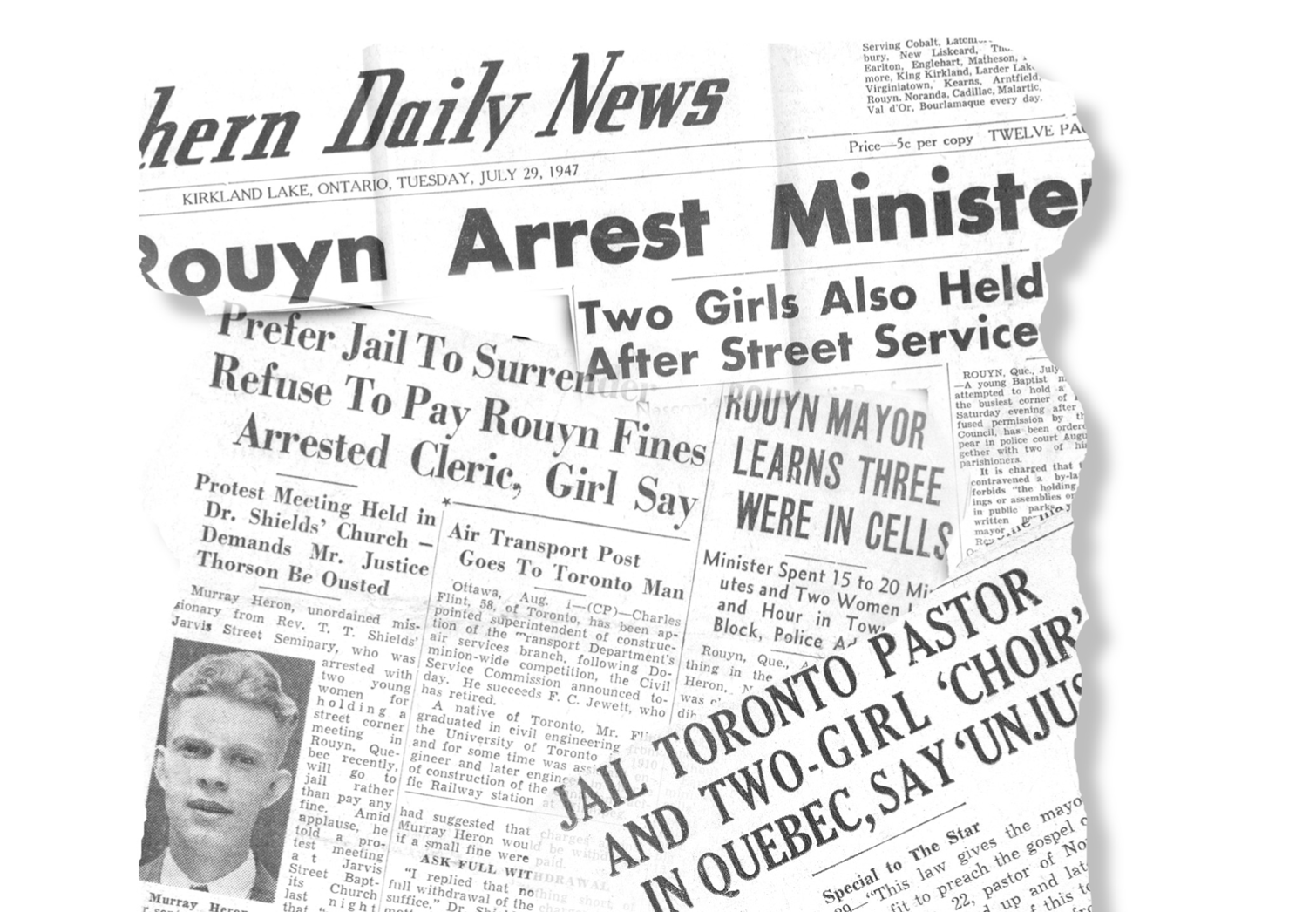 “Whether it is right in the sight of God to listen to you more than to God, you judge. For we cannot but speak the things which we have seen and heard.” Acts 4:19–20

Our first street service in downtown Rouyn in early July 1947 is etched in my memory. Seven Christians from the church had joined me. We had chosen a wide street where there was little traffic, and plenty of space to hold a meeting without any obstruction to vehicles. At the same time, the location was close to the main street where throngs of people passed by on a Saturday or Sunday night. We had just begun our preaching and singing to a fine congregation of approximately 100 people when, to our great surprise, two police cars arrived with six officers. They immediately ordered us into the cruisers and took us to the police station.

The police detained us for approximately half an hour while the chief investigated our literature. He then told us he would not permit us to hold meetings in Rouyn anymore. We were sternly warned that if we persisted, our new home would be behind the iron bars he pointed to, only a few feet away.

This was startling and difficult news. Within a few days I went to see the mayor, but he adamantly refused to grant us permission to preach on the streets of Rouyn. He reiterated the chief’s warning that they would not hesitate to arrest me and lay charges that could bring a penalty of two months in the local jail.

The following week, I learned that the police had stopped members of the Salvation Army on Sunday night, even though they had already been preaching on the streets of Rouyn for eight years. They later received per- mission to resume their street meetings, but the city continued to deny us the same privilege.

I wrote to Dr. Whitcombe at the seminary in Toronto, asking for his godly counsel. He answered immediately by telegram, advising me to see the best lawyer in town at the expense of the Canadian Protestant League. The League’s purpose was to defend and protect Protestants from threats to their civil and religious liberties. At this time in Canadian history, the social and religious climate was very tense between Protestants and Roman Catholics with much suspicion and mistrust on both sides.

I consulted Max Garmaise, an experienced Rouyn lawyer, who was well aware of religious opposition in Quebec. After explaining the situation to him, I was told such high-handed action on the part of the authorities should be shouted from the housetops. Mr. Garmaise asked for a few days to study the case before giving me his legal advice on the best course of action.

Meanwhile we obtained the permission to preach in Noranda, a town with more Protestants. On Saturday evening, July 12, we went to the borderline between the two towns, stood on Noranda soil and preached to an assembled crowd on the Rouyn side. We used these tactics because we were convinced of the importance of reaching the French-speaking people of Rouyn, and we saw open-air work as our best opportunity to do so. I feared that if the Rouyn authorities succeeded in silencing us, preaching would soon be stopped in Malartic, Val d’Or, and perhaps every other town in Quebec that needed to be evangelized.

On Sunday night, after the evening service at the church, we held a meeting in the park by the lake in Noranda. A crowd of close to one hundred gathered to listen to our preaching and singing. Within a few days, Mr. Garmaise informed me of his professional opinion. He felt that under Canadian law the Rouyn authorities had no legal right to imprison us simply for preaching on a quiet Rouyn street. He called the city’s municipal bylaw ultra vires, which means it went beyond the scope of legal power or authority, contravening the fundamental rights of all Canadians to freedom of speech and assembly. On those grounds, he was willing to defend our rights in court and was confident we could win our case. Therefore his legal advice was that we should continue our meetings, knowing full well we would be arrested. This would then enable us to contest the bylaw in court.

However, before fighting on that front, we were advised to make an official written request to the mayor and the chief of police. Mr. Garmaise wrote the letter and mailed it on Tuesday, July 22. The following Friday he called to say the mayor had refused us permission. I felt that too much of the summer had been wasted already and told the lawyer I was going to preach in Rouyn on Saturday night.

I was apprehensive, yet anxious to do God’s will in this matter. It was one of the most important decisions of my life, a step that would shape my entire future ministry. On one hand, I had always been a law-abiding citizen and felt that it was essential for a Christian to obey the law. However, the Bible also taught clearly that the Lord is our supreme authority. If the laws of man stand in the way of accomplishing the will of God, we are to give him first place.

I was reminded of Daniel in the Old Testament, who continued to pray despite the laws of the land forbidding him to do so (Daniel 6). I will never forget the moment I came face to face with this awesome decision. I knelt in my room and told the Lord that I was willing to do whatever he wanted me to do even though it might mean spending the rest of my life in a Quebec prison. I resolved that whatever the cost, I would do his will.

On Saturday morning, July 26, I left my place of prayer and went to the mayor’s office to see if there was any possibility that he would relent and let us preach. I told him I had tried to cooperate in every way possible, yet now I had no choice but to preach the gospel. I said we were planning a meeting that night.

He was very upset and immediately grabbed the phone to advise the chief of police of our intentions, but the line was busy. I told the mayor I had really nothing more to say and suggested that he could tell the chief of police that I would be on the street at eight o’clock. With these words I left the mayor’s office.

I informed two missionaries, Alice Moore and Eileen Veals, who were working with us in the Noranda church, of what had just happened and asked them if they were ready to go to jail for the gospel. They were willing. The three of us met at the church that Saturday evening for a time of prayer before going out to preach. Now, 50 years later, I still vividly recall those solemn moments when we sought God’s grace, telling him we were ready to go, but asking him to close the door definitely if it was not his will.

At first it seemed impossible to start our open-air meeting that evening at eight o’clock as planned because of a steady downpour. We thought per- haps God was closing the door, but after we committed everything to the Lord, we opened our eyes to see streams of bright sunlight shining through the church windows. It was time to go. As the Lord said to Joshua, “Arise, go over the Jordan.”

On that warm July night in Rouyn, we were arrested and taken to the prison. We spent less than an hour locked behind iron bars while charges were laid and bail was arranged. I had the joy of telling the men in my cell of the Saviour who died for their sins. They listened intently.

That evening I went home and typed a letter to my mother: “We are rejoicing in the assurance that the Lord will never leave us nor forsake us. It is indeed a privilege to be counted worthy to suffer shame for His name. I remember how I said that the Lord was numbered with the transgressors. He poured out His soul unto death. Surely we can do a little to repay such a tremendous sacrifice….Don’t worry about us up here, as nothing has happened contrary to the will of the Lord.”

The Canadian Press carried the story of our arrest and every newspaper office in Canada received the news. Suddenly thousands of Christians across our nation became aware of our critical situation. In homes and in prayer meetings all over our land, people began to pray.

The Canadian Protestant League, deeply concerned by this religious freedom issue, was eager to help. Events unfolded swiftly. On the Thursday evening following our arrest, the League organized a special meeting at Jarvis Street Baptist Church in Toronto. Over a thousand people came to demonstrate their support. Alice Moore and I were present to tell our story. By the following week a full account of the evening was printed in a special edition of The Gospel Witness and Protestant Advocate, a publication edited by Dr. T. T. Shields, making even more people aware of the details of our situation.

After the Toronto meeting, I travelled back to Rouyn on the night train. Upon my return I had a letter on my desk from the mayor and chief of police of Rouyn, granting us permission to hold street meetings on Mondays, the quietest night of the week. We recognized this as a partial victory, as we had previously been refused any meetings, on any streets, on any night, but we could not be satisfied with this small concession. If we were to reach the thousands of French Canadians in the region, we needed the liberty to preach on the weekends when the streets teemed with needy souls.

Nevertheless we took advantage of this new permission the following Monday. We were a little timid wondering what the outcome of the evening would be, but it was an exceptionally good meeting as scores of people lined the sidewalk peacefully and others listened from balconies and open windows.

Regardless of our new authorization, we still needed to go to trial for the charges laid against us in July. The Canadian Protestant League retained a prominent Montreal lawyer, Harold Cotton, to defend us along with our lawyer from Rouyn. The trial was postponed for a number of weeks until our attorneys were available to represent us. Magistrate Felix Allard of Amos presided over our trial which lasted nearly three days, concluding on Wednesday, October 1, 1947. Our case received detailed coverage across Canada and in parts of the United States. Even Time Magazine in New York gave a brief report of the trial.

Our lawyers did an excellent job of presenting the argument for our defense. The town argued that we were denied permission to preach in the street because of traffic concerns. But when Mr. Cotton cross-examined the mayor, it became evident, beyond all doubt, that we were stopped because of definite discrimination against us. The permit we had been granted after our arrest was valid only for Monday nights, whereas the Salvation Army had obtained permission to hold meetings any time or place in town, except Saturday night or pay night.

The press reported Harold Cotton’s summary of the case based on the argument that the bylaw itself was ultra vires:

Due to the publicity generated by the trial and the importance of his decision, Magistrate Allard wanted considerable time to review all the arguments of the case before pronouncing judgment. The judge’s decision was scheduled for early November.

This is an extract from Footprints across Quebec: The autobiography of Murray Heron—pioneer missionary to Quebec