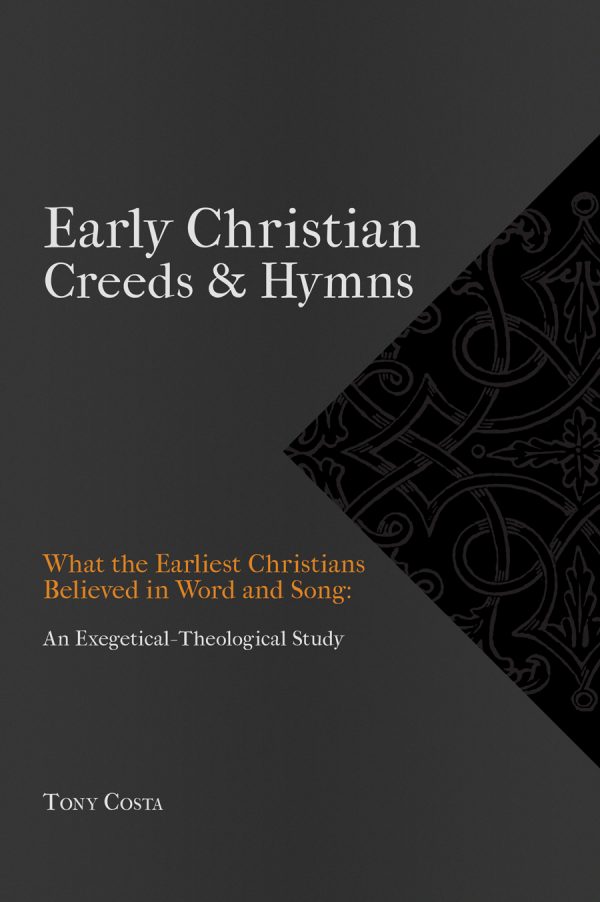 Throughout the history of the Church, Christians have expressed their faith in word and song. Among the ways they confessed what they believed was through creeds. The term“creed,” which comes from the Latin credo (“I believe”), has played a central role in the identity of the Church and expressing her core beliefs. Some of the more famous creeds are the Apostles’ Creed and Nicene Creed. While these creeds developed in the first few centuries of the Church, the earliest creeds are embedded within the New Testament text itself. The singing of hymns, which are closely associated with creeds, has also been part of the Church’s ancient heritage. These credal hymns were adopted from the synagogues and have continued to be an integral expression of worship today. The New Testament contains many of the hymns that the early Christians sang. Since these hymns are confessional in nature, we can state that hymns were creed-like, confessing in song what the earliest Christians believed. This book examines the ancient creeds and hymns found in the New Testament, shedding light on what the earliest Christians held to be central, definitional, and foundational to their faith.

“Historically, Biblical Christianity is a credal or confessional faith. By examining in detail the evidence of the New Testament about this area of church life in the first century AD, this new study by Tony Costa convincingly demonstrates this to be a vital aspect of the Christian Faith. The idea that Christianity is simply about love is thus shown to be a patent misreading of Apostolic Christianity. Our Faith is grounded on both love and truth. A very helpful book: ideal for personal or group study.”

“If someone says ‘I believe the Bible,’ is that sufficient to really tell you what he or she believes?  Throughout Church History, Christians have rightly felt the need to clarify their belief in God’s Word by summarizing its core teachings in creeds and confessions. And, because ‘the hymnbook is the theology text of the church,’ we can also learn much about what Christians actually believed and valued by studying the hymns of the church.  In this fascinating and well-written book, Dr. Tony Costa, points us back to the earliest confessions and hymns found within the Scriptures themselves.”

“In this clearly argued, well-researched, groundbreaking work, Dr. Tony Costa demonstrates that all the core beliefs associated with ‘Christian orthodoxy’ were already laid out in the New Testament documents themselves, in particular in their creedal and hymnic statements about Jesus. This will be a great resource for apologists, theologians, and New Testament scholars. Highly recommended!”

“After an historical overview of the content and importance of creeds in early Christianity, Costa rightly demonstrates that Christian hymns and creeds have their roots in the Jewish Scriptures. Old Testament believers had their own creeds, such as the Shema and the ‘Song of the Sea,’ and a number of songs collected in the book of Psalms confessing and reviewing God’s salvific dealings with the nation of Israel. Most intriguing, then, is the fact that the high Christology expressed by the New Testament creeds and hymns was birthed among Jesus’ disciples, who were faithful monotheistic Jews. An edifying piece of work!”

“Tony Costa gives us a book solidly grounded in important biblical and theological facts: Singing to and about Jesus Christ was important to the earliest Christians, and their original hymnody was heavily theological, with an emphasis upon Christology. Costa suggests several linguistic criteria for picking out plausible candidates for hymnic material in the New Testament, and he carefully analyzes its theological content. Admitting openly that the musical settings for these segments of Scripture are lost to history, Costa nonetheless points to practical ramifications for our own worship. For example, he emphasizes the fact that the songs we sing in church should not be mantras; rather, they should contain a robust theological element. His analysis of these passages also contributes helpfully to the discussion of high Christology in earliest Christianity.”

Lydia McGrew, Ph.D. Author of The Mirror or the Mask: Liberating the Gospels from Literary Devices

“It’s difficult to overstate how important Dr Costa’s look at the earliest creeds and hymns of the New Testament is.  It demonstrates a fully-developed understanding of the person and work of Christ centuries before their re-articulation in the ecumenical councils of the church.  Thereby he tacitly undercuts those who would drive a wedge between the Bible and traditional church teaching.”

“In response to attacks on the divine glory of Jesus, the Church should never be caught on the defensive. Instead, like this book, the Church should always be calmly and consistently affirming the high Christology of the New Testament. Tony Costa highlights and carefully explains the creeds and hymns of scripture in order to portray the very earliest Christian beliefs about Jesus. In so doing he preempts the efforts of religions and ideologies to belittle the identity of Jesus and to caricature the deity and redemptive death of Jesus as inventions of later times. For the Apostolate to Islam, this book will prove a much-needed source of encouragement and practical knowledge for its confident witness to the Son of God.”

Gordon Nickel, Ph.D. Director of the Centre for Islamic Studies at South Asia Institute of Advanced Christian Studies in Bangalore, India; Author, A Gentle Answer to the Muslim Accusation of Biblical Falsification and The Quran with Christian Commentary: A Guide to Understanding the Scripture of Islam.

“Dr Costa is probably one of the best people I know to not only understand the creeds and hymns themselves, and their impact on the church, but their importance as a defense against the attacks by those from outside the church, particularly those coming from Islam. He has tirelessly put himself forward in public debates, live-streams and recordings to not only defend the foundations of Christianity but confront the foundations of those challenging our faith, using the doctrines found in the creeds and hymns as one of his most potent weapons.”

“I am not aware of any other book that is devoted to offering a comprehensive summary of the creeds and hymns found in the Bible and how they encapsulate early Christian beliefs concerning Christ and the gospel. Tony Costa has done a fine job of distilling the current scholarship on early Christian creeds and hymns, while retaining accessibility to the general reader. Whether you are a lay-Christian, seminary student, pastor or academic, this book serves as an excellent introduction to this fascinating subject, and I warmly commend it to your reading.”