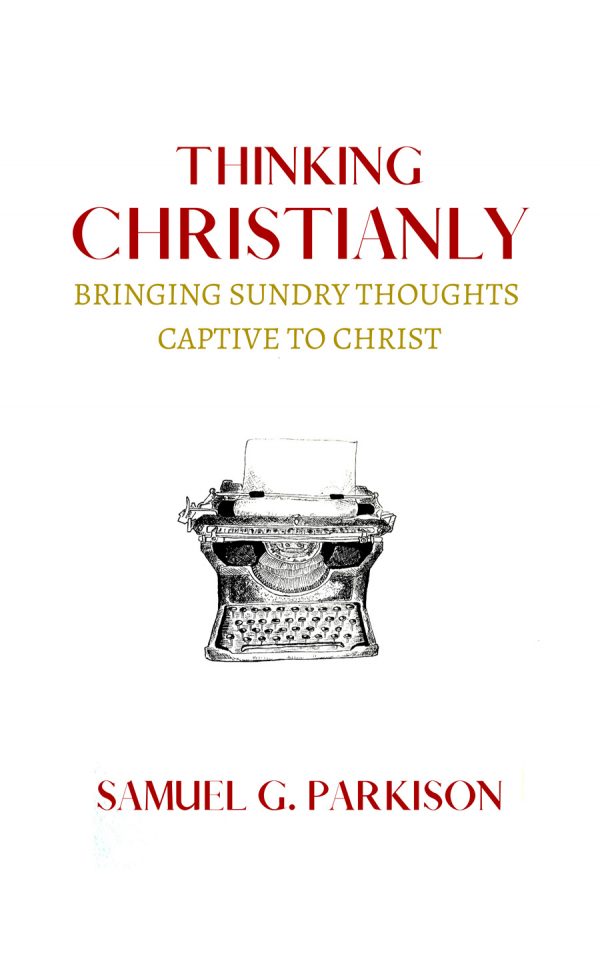 “For the weapons of our warfare are not of flesh but have divine power to destroy strong-holds. We destroy arguments and every lofty opinion raised against the knowledge of God, and take every thought captive to obey Christ” (2 Corinthians 10:4-5). Life in Western civilization is rapidly changing. In such a cultural landscape, it can be overwhelming for Christians to find the bearings. How should they think about same-sex “marriage”? Or transgenderism and the concept of “preferred personal pronouns”? Or the ever-confounding topic of racism? Or technology and transhumanism? How should Christians think about their involvement on social media? Or their consumption of entertainment? And does their Christianity have anything to do with these matters at all?

In Thinking Christianly, Samuel Parkison demonstrates an exercise in obedience to 2 Corinthians 10:4-5; he labors to bring sundry thoughts captive to Christ. Sacred cows are not spared in this collection of short essays. Parkison is concerned with showing how Christ’s lordship applies to how Christians thinking about everything, including the many perplexing and novel issues Christians face today.

“At least since Montaigne the short essay has made a big difference when it comes to morals and manners. Here Samuel
Parkison is in fine form, weighing the evangelical church and western culture at large in the balance. His muscular and direct
approach is just what we need in this age when mollifying the truth and pacifying the church are the prevailing strategies for
‘winning the world.’ I enjoyed this collection immensely.”
C.R. Wiley Author of The Household and the War for the Cosmos: Recovering a Christian Vision for the Family

“I will never forget the rush that came from first reading great Christian minds like C.S. Lewis, Francis Schaeffer, and G.K. Chesterton. It didn’t matter whether they were writing about the hypostatic union, a splattered Jackson Pollock canvas, or cheese… They opened up expansive vistas for me to behold the shine of Christ’s Lordship over all of life. Samuel Parkison is carrying the torch of these luminaries. His book Thinking Christianly does exactly what its subtitle promises, Bringing Sundry Thoughts Captive to Christ. Whether he is pondering preferred pronouns, warning of the woes of transhumanism, unearthing landmines on social media battlefields, contemplating the contagious wonder of children, or ruminating about racism, Parkison’s writing will pull you into a much larger world. It will give you a fresh sense of the joy, courage, humility, and wonder that come from taking every thought captive to the Lord Jesus.
Thaddeus J. Williams Professor of Systematic Theology at Talbot School of Theology; author of Confronting Injustice Without Compromising Truth: 12 Questions Christians Should Ask About Social Justice

“Whether he is exposing the unbiblical foundations of critical race theory, gay marriage, and transgenderism, or warning against the dangers of envy, cancel culture, and transhumanism, Samuel Parkison writes with the penetrating wit of Chesterton, the ecumenical embrace of C. S. Lewis, and the heart of a pastor who has grieved over the confusion, despair, and brokenness of his young parishioners.”
Louis Markos Professor in English and Scholar in Residence Houston Baptist University; author of Atheism on Trial: Refuting the Modern Arguments Against God

“Samuel G. Parkison writes with naked candour as he applies biblical wisdom and ‘not-so-common’ sense to a range of perplexing and controversial issues facing 21st-century Christians. Parkison’s candour is coupled with a colloquial style and a genuine pastoral concern for his readers, as he offers practical approaches to the complex and nuanced landscape of postmodernism, woke ideology, and relativism. This book is a veritable grabbag of disarming, down-to-earth wisdom, as well as timely insights in the timeless and ever illuminating vein of the works of Harry Blamires, Francis Schaeffer, C.S. Lewis, and G.K. Chesterton, et al. Not only does Parkison reflect these great luminaries in his essays, he also harkens his audience to read ‘upstream’—that is, to read the  writers and thinkers he makes mention of, intellectual giants such as C.S. Lewis, Alexander Solzhenitsyn, Herman Bavinck, Thomas Aqinas, Cornelius Van Til, and Roger Scruton. In doing so, he not only helps us to think rightly about our contemporary context, he also teaches us how to think rightly as a Christian in every situation—past, present, and future.”
Jeremy W. Johnston Adjunct professor of rhetoric at Heritage College and Seminary; author of All Things New: Essays on Christianity, culture and the arts

“As these essays reveal, Samuel Parkison is a refreshing thinker. For these are thoughtful essays that stem from a solidly biblical worldview and demand thought and not the parroting of a partyline. And they are fresh takes on important issues that, read rightly, lead to refreshment of soul and spirit. Ideal for those who want a quick read and a long train of thought.”
Michael A.G. Haykin Chair and Professor of Church History, The Southern Baptist Theological Seminary

Contents
A Word to the Reader
Chapter 1 No Fear, No Wisdom
Chapter 2 On (Not) Attending Same-Sex “Weddings”
Chapter 3 The Danger of Cool-Shaming
Chapter 4 On Not Despising Children
Chapter 5 Envy at Seminary
Chapter 6 Engaging the Culture (with Carl F.H. Henry)
Chapter 7 My Departure from Social Media
Chapter 8 Entertainment (and the Self-Deception of a “Strong Conscience”)
Chapter 9 Of Dignity, Duels, and Social Media
Chapter 10 Learning Gratitude (from Sir Roger Scruton)
Chapter 11 A New Kind of Racism (A Review of White Fragility)
Chapter 12 Pride (or, On Theological Jerks)
Chapter 13 The Obsession of “Brokenness”
Chapter 14 Against Cancel Culture
Chapter 15 Men and Abortion
Chapter 16 Transgenderism and Preferred Personal Pronouns
Chapter 17 The Christian and Art, Part 1
Chapter 18 The Christian and Art, Part 2
Chapter 19 “Pulling Down Deep Heaven:” On Transhumanism
Chapter 20 The Virtue of Protestant Catholicism
Chapter 21 Natural Theology and the Tragedy of Chronological Snobbery
Chapter 22 Confess Your Disturbing Impulses Here